Santa and the Brain

Have you ever stopped to think about how the magic of our secular Christmas impacts our brain?  At what point does our brain recognize the difference between fact and fiction?  When do we stop believing in Santa and what role does the brain play in this process of development?

What role does mental time travel, Pavlov’s drooling dogs, cocaine, and neurons have to do with explaining our Christmas brain?!

Check out this recent article posted in The New York Times, Santa on the Brain, by Dr. Kelly Lambert for a more in depth description of how the brain changes as we grow and how that alters our perspective on the magic of Christmas. 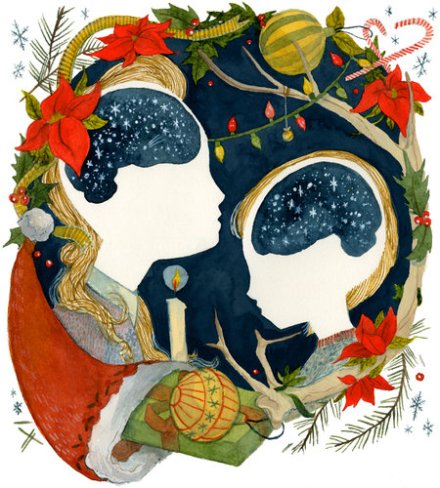 “ ‘Tis the Season” is often heard this time of year, but what does it really mean? Does it mean the winter season is here? Technically, it is winter, and this year in Houston it is cooler that usual. So it really feels like winter. Who knows, this may even be one of the years that Houston gets snow. It is rare, but it could happen.
“ ‘Tis the Season” could mean it is the time to go out and give generously (maybe too generously for our budgets). It is definitely a time that we think of giving; giving to family and friends and to the less fortunate. This is the time of year we count our blessings.
“ ‘Tis the Season” could also be a season of rest. Schools are out for a time, so teachers rest but parents don’t. Most work places give time off for Christmas. Here at Houston Baptist University it is a time to fit in a fast term after a break.
“ ‘Tis the Season” may also be a season of travel. Many of us travel to be with family or have family members travel here. It is certainly a time of family.
To me, however, “ ‘Tis the Season” means Christmas. Christmas! The real reason for Christmas is the birth of my Lord and Savior, Jesus Christ. Just the mention of HIS name brings joy and celebration. This is the time we celebrate the birth of Jesus. Did Mary know that the child she delivered would one day deliver all of us from sin? Did Mary know that this season would bring to all of us the perfect gift, the perfect family, the perfect season? Did Mary know that her son, Jesus, would one day do miracles of walking on water, healing the sick, raising the dead, making the blind to see and the deaf to hear? Did she know that one day her son, Jesus, would take on the sins of the world and shed HIS blood for them that we might be saved from the death that sin requires? Did Mary know that her son, Jesus , would rule the world, not as an earthly king, but a Heavenly one? I doubt she thought of all that as she looked into the precious face of her baby, but she did know it was a fulfillment of God’s Word and the Old Testament prophesy.
Because of all of this it truly “ ‘Tis the Season” to rejoice and be exceedingly glad, because Our Father in Heaven loves us enough to send HIS son.

In Memory of Nelson Mandela

The following blog originally appeared on April 11, 2013. At the request of Dr. Renata Nero, it is being reposted in memory of the extraordinary life of Mr. Nelson Mandela.

A Lesson in Posttraumatic Growth

And do not be conformed to this world, but be transformed by the renewing of your mind, that you may prove what is that good and acceptable and perfect will of God. Romans 12:2

Earlier this year, a great man was hospitalized for a recurring respiratory problem. Some speculate that his current health challenge is related to his imprisonment where for 18 years he was confined to a small cell and forced to do hard labor in a lime quarry. Oddly enough, this same lime quarry and small prison cell may have prepared him to lead a nation. This great man is Nelson Rolihlahla Mandela, the first democratically elected president of South Africa.

In 1964, Nelson Mandela arrived on Robben Island to serve a life sentence. He along with other co-defendants were accused of plotting to overthrow South Africa’s apartheid regime and convicted of sabotage. His time in prison easily could have spiraled into a life-sentence filled with bitterness, unforgiveness, and hopelessness. Instead it was turned into a series of opportunities for Mr. Mandela to strengthen his commitment to seeking justice and radically transforming the lives of those around him.

One of the opportunities he seized while in prison was establishing a “university”. This “university” was secretly housed in a cave and was beyond the view of the prison guards. The prison guards intended for the cave to be used as a restroom for prisoners working in the lime quarry. Instead, in this unlikely place, Mr. Mandela established a school where history and politics, among other subjects, were taught to fellow prisoners who had little to no formal education prior to being imprisoned at Robben Island.

Furthermore, despite being confined to a small cell where he slept on the floor, Mr. Mandela used this as an opportunity to learn from the prison guards. He entered into debates with them and studied their worldview, history and language. In so doing, he was in a stronger position to form a coalition government with all South Africans once he was released from prison and elected to the highest office in the land. This was yet another way Mr. Mandela transformed his prison sentence into preparation for the presidency.

Romans 12:2 instructs believers to take a Godly perspective when it comes to considering life’s circumstances. In Mr. Mandela’s case, he took a constructive approach when dealing with injustice. As a result, he saw new opportunities he would have missed otherwise, developed relationships with the prison guards he could have viewed as “the enemy”, and became a symbol of strength and courage to people around the world. Conversely, the worldly way of dealing with injustice is to vow revenge, retaliate and harbor unforgiveness. This clearly is contrary to the Word of God. Well, what about those persons who do not subscribe to biblical teaching? Is there a psychological correlate to support this biblical teaching? The answer is “yes” and is found in the area of posttraumatic growth research.

Posttraumatic growth (PTG) research is the systematic study of how adversity has the potential to lead to positive change. Examples of positive change that may result from a traumatic event include the following: 1) finding opportunities and possibilities in the midst of the crisis; 2) developing a closer identifcation with those who suffer; 3) appreciating life more fully; 4) discovering a new level of personal or inner strength and 5) deepening convictions or spiritual beliefs (Tedeschi & Calhoun, 2004).

In closing, there are PTG lessons all around us and one need not be a world leader in order to experience growth through adversity. By choosing to look at and respond to painful life circumstances in a constructive way, there is the potential to exceed the quality of life enjoyed prior to the crisis. Finally and not surprisingly, the biblical imperative for believers to renew one’s mind is not just good for spiritual growth but for psychological well-being as well.